This article introduces a CoC packaging planning project, in which almost all packaging in the global part-by-part supply network of production sites worldwide has been re-planned in such a way that repackaging processes are obsolete.

The Packaging Planning division of the C-P-S Group:

The Center of Competence Packaging Planning specializes in the following topics:

Save millions by eliminating repacking processes

After 5 years, the largest single project in the history of the C-P-S for a major South German automobile manufacturer in the field of packaging planning was successfully completed. However, the project itself was not only about the planning, coordination and introduction of new packaging for newly launched vehicles, but also the implementation of a paradigm shift in the part-by-part overseas supply from the classic repackaging by a logistics service provider for pre-packaging by the component suppliers.

The first phase of the project consisted in the fundamental analysis of the newly planned process and began with the creation of a new modular system of disposable BMSs and KCLs adapted to the more up-to-date overseas conditions. The ability to combine the individual packaging materials with high container utilization was a key design factor in order to be able to achieve profitability in the further course. Apart from the rough questions about dimensions of the packaging, it was also about the fine details of the construction of this. Various prototypes based on different FEFCO codes were produced and put up for discussion. The discussion was based on qualitative facts about the individual prototypes as well as commercial facts provided by the C-P-S team.

In addition to the technical questions, it was also necessary to clarify legal questions on liability and the transfer of responsibility, which were raised by the new constellation of prepackaging. Explicitly it was about the fine line of the sovereign detail planning of the packaging by the suppliers with simultaneous high interest of the influence of the OEMs.

“… In addition, each conversion had to be confirmed by an individual economic analysis and presented for approval. Here, too, the C-P-S team was not only the source of input for the packaging data for the business case, but also significantly shaped it. “

The C-P-S assisted the experts in clarifying these difficult questions through the expertise of being able to check and recognize packaging material qualities in advance. A test catalog adapted to the special requirements of the client with correspondingly stored test definitions according to current DIN and ISO standards was developed in order to test and prove the suitability of the packaging in advance. Failure to pass the tests will help identify and eliminate weak points.

The second phase of the project was about testing the module system created. The occasion was the start of a new vehicle in China. In the test phase, only selected suppliers were approached to switch to prepackaging and packaging was coordinated with them.

In addition, each conversion had to be confirmed by an individual economic analysis and presented for approval. Here, too, the C-P-S team was not only the source of information for the packaging data for the business case, but also significantly shaped it. 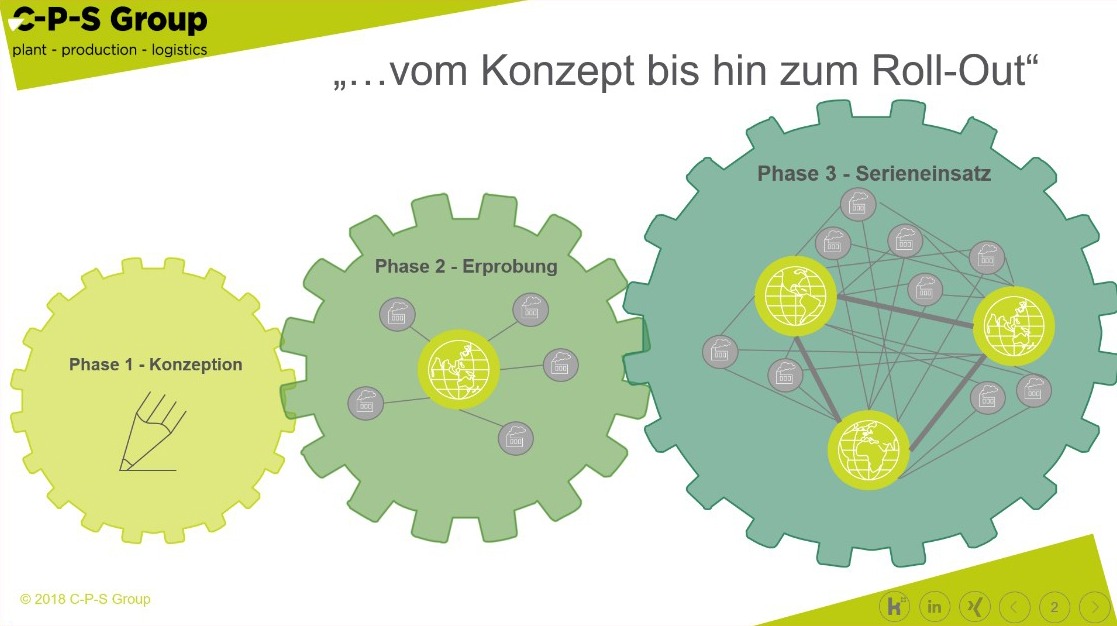 On the basis of the results of the trial phase, which was very successful in terms of quality, economic forecasts for large-scale series use were prepared and presented. Lessons learned from this phase also helped to identify additional savings potential. In the end, the positive decision was made for series production.

With this, the “right” work in this project began, because it had to be contacted not only with a few suppliers, but with all. In order to create a clean basis for large-scale use, a total of 2 large supplier days were held, to which all suppliers were invited and where the suppliers were informed about the idea, process and expectations of the pre-packaging. Likewise, the suppliers had the opportunity to ask questions.

Then it went into the implementation. After the first overseas continent, Asia, with the production country China, followed by two further production sites in Africa (South Africa) and North America (USA), which were included in the direct implementation, as well as another site in Central America (Mexico), where the evaluation and planning the early phase went. The range of tasks included the planning and implementation of pre-packaging for the part-by-part dispatch of more than 3,500 families of parts with their corresponding variants as well as DIN and standard parts from more than 500 suppliers in 32 different countries. The planning team reached an enormous size, so that it had to be subdivided into various sub-teams. In Germany alone, the team was active in 3 locations. There were also permanent presences in the individual vehicle plants. Almost every supplier was also visited at least once on site at the production site as part of the coordination and implementation. Over 61 planners, trainees and factory students were involved in the project over the project period by C-P-S.

“… more than 3,500 part families with their corresponding variants as well as DIN and standard parts from more than 500 suppliers in 32 different countries.”

The commercial processing and billing of the project took place via a generically developed ticket system for this project. The implementation was technically realized by a self-developed database. More than 40,000 tickets were processed over the project period and a saving potential compared to the previous year. lifted the classic repackaging in the double-digit million range.

Further potential savings were made possible with the introduction of prepackaging and some have already been lifted. After all, direct packaging into an overseas shipping unit is the basic prerequisite for converting suppliers with very high shipping volumes to direct shipment. In addition to the classic potential of collecting high-volume components immediately overseas in the container from the supplier and sending them to the shipping port, suppliers who do not achieve sufficient volume on a single component, but already have their entire delivery portfolio, are now eligible. By using a uniform modular system not only the containers can be optimally utilized. Suppliers whose core competencies lie in the production of their respective components are provided with a helpful tool for packaging them. On the other hand, there is also a significant relief on the part of the receiving plants, which now, no matter whether sent directly or via the logistics service provider, always get the same pool of packaging materials. This facilitates on-site supply planning and eliminates unnecessary repacking at the factory.

The scope and duration of this project underline the know-how of C-P-S in the area of ​​disposable packaging planning in general as well as in the handling of major projects in particular. The business model of the C-P-S designed for partnership and professional cooperation with the customer is also underlined hereby. 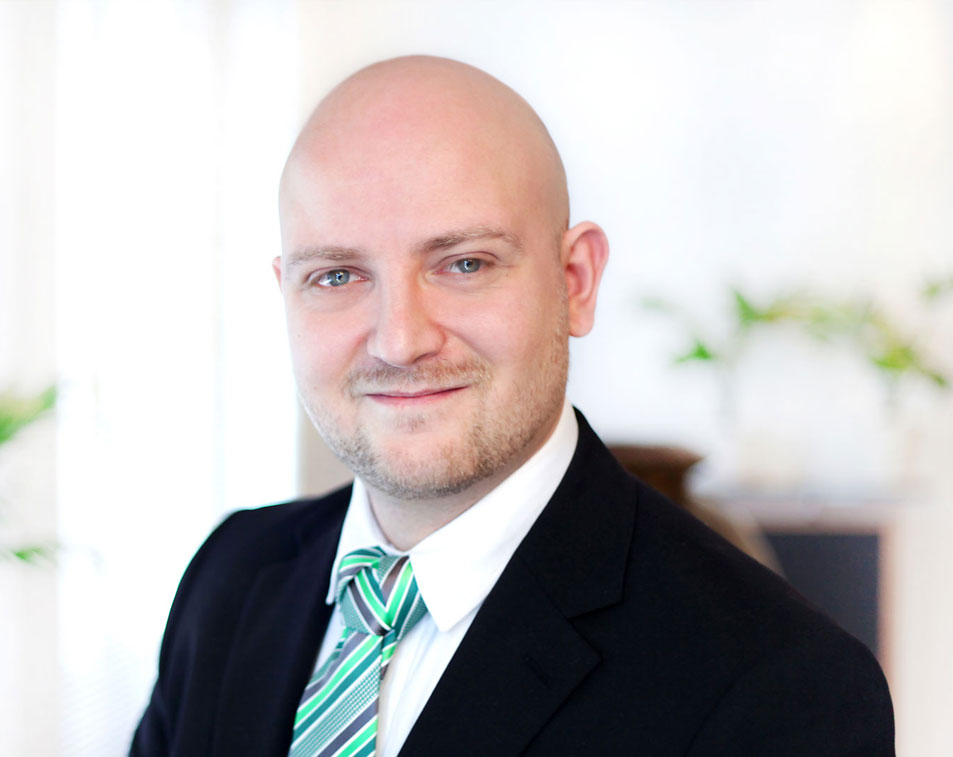 Ingmar Wunderlich has been responsible for packaging planning at C-P-S since 2014 and is looking back on more than 10 years of experience in the field of automotive packaging. Already in his first project in the field of reusable packaging planning, after two years he became a subproject leader. The next step in the career was followed by the assumption and responsibility of a separate project in the area of ​​multi-use and one-way packaging planning combined with a stay of several years abroad in Asia. In addition to the technical know-how, social components as well as intercultural intelligence were in demand. After successfully completing the project and returning to Germany, the next step was the CoC Head of Packaging Planning. In addition to the professional responsibility of the projects of approx. 50 employees, employee development is also an integral part of the work as CoC manager. Since 2016, he also heads the C-P-S subsidiary in South Carolina, USA.

The C-P-S Group is an independent, owner-managed medium-sized company with approximately 180 employees. Since 1982, the C-P-S Group has been a partner in the conceptual planning and realization of production plants and logistical processes in factories. Through a clear focus on this technical advice and service, the C-P-S Group has built up expertise and method know-how that its customers appreciate, also in the context of increased outsourcing of projects. The customers of the C-P-S Group are increasingly coming from the automotive industry and plant construction, but also architectural firms and medium-sized mechanical engineering.